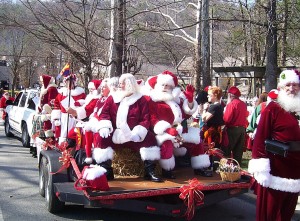 Santa Claus may run deliveries out of the North Pole but he hangs his hat where his heart is, in Gatlinburg, Tennessee.

The proof is in the parade – which happens this Saturday, when a whole convention of Santas and Mrs. Santas take to the streets of Gatlinburg to turn the seasons upside-down for all the Spring Break vacationers!

Santa needs a break too, and that’s why Santa families from across the country and around the world have descended on Gatlinburg again this year for the annual ClausFest, held at the Gatlinburg Convention Center March 15-19.

The event is by registration only, and creates a rare opportunity for inveterate and professional Santas to meet in joyous fellowship and share tips and tricks about the art and craft of being Santa and Mrs Claus.

The Santas have an action-filled agenda for themselves throughout the event, with workshops, vendor shows, variety shows and dinner celebrations.

But to kick off ClausFest in style – and ever generously – the Santa crews step out to give us a sight to behold in their Grand Santa Parade, complete with Mrs Clauses, helpers and elves. They say that the REAL Santa will be in the parade somewhere, but it’ll be the children who have to determine just who he is!

To close the ClausFest convention on Wednesday, March 19, from 11 am to 12:30 pm weather permitting, our jolly red friends will take to the snows again with snow-tubing Santa Races at Ober Gatlinburg’s Snow Tubing run!

The Grand Santa Parade starts at 4 pm this Saturday, March 15, at Traffic Light #10 and proceeds for an hour or more to Light #6.

UPDATE: Here’s a slideshow of photographs we took of the parade!

Santa and Mrs. Claus work hard all year to make children’s eye sparkle with delight and warm the hearts of friends and family. While they live in the snowy climes of the North Pole, their hearts belong in Gatlinburg, Tennessee. That’s why when you arrive for your family spring break vacation this year, you may… Read more »

As the Christmas period draws closer it’s always good to remember what the time was originally about, and the Smoky Mountain Area Rescue Ministries organization achieves this every year with its Festival of Trees in Gatlinburg, a first taste of Christmas in the Smoky Mountains. Share…FacebookTwitteremailReddit

December in the Gatlinburg and Pigeon Forge area means lots of festive events, and 2021 is in full swing with seasonal fun – here are the highlights of the month to watch for. Share…FacebookTwitteremailReddit