“Bet that Pigeon River is colder than the sea.
Christmas in the Smokies that’s where I want to be”

Hey it’s Christmas, let’s have a Bluegrass Festival – of course! And the Smoky Mountain Convention Center in Pigeon Forge is the place to go for the 2014 Christmas in the Smokies Festival, Wednesday through Saturday, December 10-13, 2014.

The event is headlined by Lorraine Jordan & Carolina Road, a seasoned bluegrass chart-topping band of accomplished musicians. The band presents a strong and high-energy bluegrass sound, with standout instrumentals combined with unfailing skill at weaving harmonies. 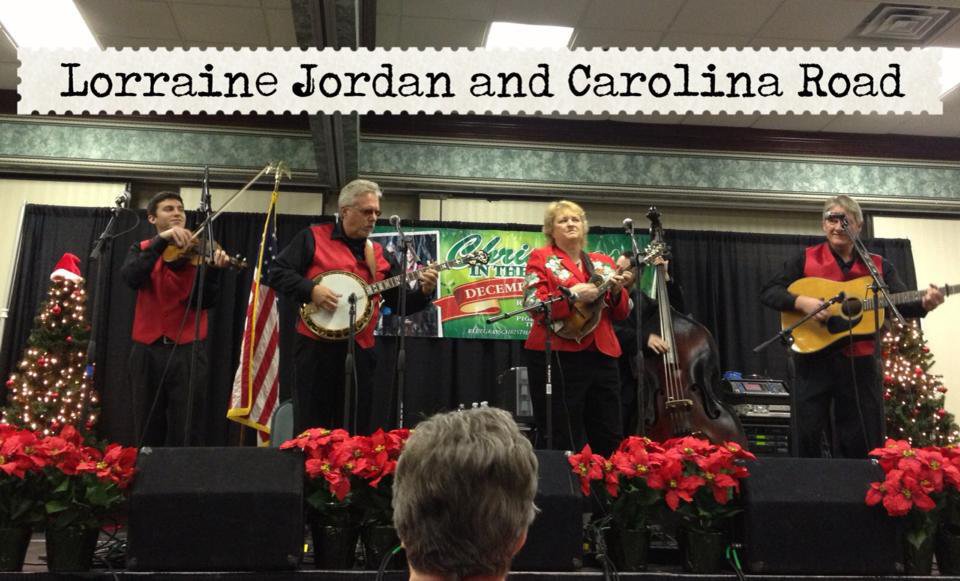 The North Carolina band is fronted by award-winning Lorraine Jordan on mandolin and vocals, steeped in bluegrass and known throughout the bluegrass scene as the Lady of Tradition.

The band has gathered some friends to join in the fun, with over a dozen performers playing in shows through the four-day festival. The music starts on Wednesday night at 7 pm and features an All Star Jam at 8 pm. Wednesday night is free for weekend ticket holders.

Thursday starts picking around mid-afternoon, and Friday offers workshops in the morning and music from lunchtime til bedtime, finishing with a jam session after the shows until midnight. The festival culminates on Saturday with all-day music and an after-supper, 4-band show at night. The event is at the Smoky Mountain Convention Center in Pigeon Forge at 4010 Parkway close to Light #8. Tickets start at $20 and seating information is available online, with tickets now at the door – latest word is there should be plenty of seating available for walk-ins, but call to be sure at 919-779-5672

For the full lineup and more information check the Christmas in the Smokies Bluegrass Festival web site.

If you agree that bluegrass is the sweetest music ever invented, then you need to be in Pigeon Forge over the next few days.The 2015 Christmas in the Smokies Bluegrass Festival is happening at the Smoky Mountain Convention Center in Pigeon Forge, December 9-12. Tickets available at the door. Headlined again by the driving force… Read more »

There’s a street party for all the family happening in historic downtown Seviervile Friday and Saturday, May 16-17, with a host of bluegrass bands, all kinds of barbeque – including the kind you judge in a prize-winning competition – arts and crafts and all manner of street fair entertainments. Share…FacebookTwitteremailReddit

A landmark bluegrass show happens Saturday night, March 22, in Gatlinburg at The Holler, inaugurating the 2014 summer music season of Ole Smoky Tennessee Moonshine Distillery. The talent-stacked show is FREE, it starts at 5 pm, it’s going to be live-streamed, and it features two of the signature sounds of the hit movie, “O Brother… Read more »