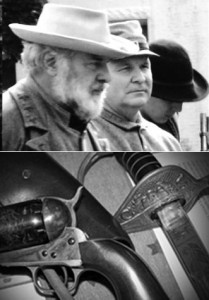 We can reach out and touch the Civil War up close when the 3rd Annual Smoky Mountain Relic Show & Sale is staged in Pigeon Forge through the weekend of August 25-26.

This event features authentic Civil War relics of all kinds, from weaponry to dresses, along with re-enactments and demonstrations by military and civilian groups, and presentations and stories of history by authors, actors and historians. There will be muskets, rifles, pistols, photographs, uniforms, artifacts, relics and collectibles both to admire and to buy.

Popular musician, vocalist and humorist Ross Moore will again bring his beautiful mountain music from that age to the weekend event, adding his fine voice, wonderful humor and many of the 13 instruments he plays (which include 12 String Guitar, Hammered Dulcimer, Appalachian Dulcimer, 5 String Banjo, Mandolin, Dobro and Celtic Harp).

The show also presents Women’s Roles During the War Between the States, as told by  Mrs. Lee, Mrs. Jackson, Mrs. Lincoln, Mrs. Stuart and Mrs. Marshall.

On Saturday, Maury’s Artillery, a light artillery battery recruited from Maury County Tennessee, in 1862, will be on hand to create “Thunder in the Forge” from its full battery of cannons. Artillery demonstrations will begin at 10:00 am that day and continue each hour on the hour until the 4:00 pm firing. Other firing demonstrations on Saturday include a mountain howitzer and a Tredegar Mountain Rifle.

Also on hand will be the beautiful replica of the famous Confederate submarine H. L. Hunley, which played a large role in the history of naval warfare as the first combat submarine ever to sink an enemy warship.

The National Civil War Naval Museum from Port Columbus, GA will also be joining the show, bringing many articles and surprises from the museum. Additionally, there will be over 100 tables featuring a fantastic collection from relic hunters and traders from around the U.S. So come to buy, sell, trade or just enjoy to your heart’s content!

The 5th Annual Smoky Mountain Military and Relic Show is coming to Pigeon Forge at the Smoky Mountain Convention Center this weekend, August 23-24. This year the show combines with a tribute to Vietnam veterans in a parade on Saturday, August 23, and an exhibit staged August 21-24. Share…FacebookTwitteremailReddit

The Tennessee Museum of Aviation in Sevierville hosts a climate-controlled, 35,000 sq ft hangar filled with arrays of exhibits and memorabilia. It also has real warplanes that fly, and a runway right outside the hangar doors to prove that museums don’t have to be dull, or quiet, or even stay still without moving! Share…FacebookTwitteremailReddit