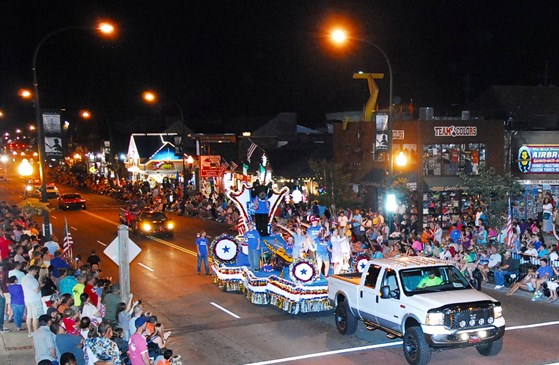 People arrive early to claim their viewing spots along the bustling Parkway, and by 2 pm on Sunday the entertainment will have already begun as the air fills with music leading up to the midnight parade.

The Aquarium is at traffic light #5 on Parkway, the one place where all the Gatlinburg trolleys stop. Even better, the trolleys on Parkway are free during this part of summer.

Finally at midnight, the parade will begin at traffic light #1A, East Parkway and turn south to traffic light #3 on Parkway, then course down the length of the thoroughfare to light #10, Ski Mountain Road. It takes between one and two hours for the full procession to pass.

For more than 40 years, this celebrated, small-town parade has paid homage to our nation’s independence, military and veterans. The event has been distinguished as one of the Top Ten Parades to See In the U.S. by National Geographic Traveler Magazine.

Livability.com ranked it in the Five Best Fourth of July Celebrations in Smaller Cities, and the International Festivals and Events Association has given it multiple Grand Pinnacle Awards.

Gatlinburg on the Fourth of July

At 2 in the morning on the Fourth, the people of Gatlinburg go home to get some rest for the day ahead, because Sunday night’s excitement and the midnight parade are just the start of the celebration.

The Fourth brings a full day of fun. In Gatlinburg, spectators will gather down by the Little Pigeon River for the annual River Raft Regatta. Anything unmanned that floats can be entered in the 10 am registration at Christ in the Smokies Museum & Gardens. At noon the race begins at Christ in the Smokies Bridge on River Road, floating downriver to the finish line at the bridge in front of Ripley’s Aquarium.

Many prizes will be awarded for this competitive, fun and relaxing regatta. The two award categories are “trash” (not hand-made) and “treasure” (hand-made) rafts. Prizes will go to the top 3 in each category, as well as a “Judges Choice” award for the most creative raft, and also to the youngest and oldest participant.

Music follows the Regatta, with the 100th Army band in a free concert at 8 pm leading up to the fireworks spectacular, and playing again afterwards that night.

Pigeon Forge on the Fourth of July

Pigeon Forge begins its own day of celebration at noon also, filling picturesque Patriot Park with thousands of people for the Annual Pigeon Forge Patriot Festival. There will be vendors, plenty of food, a Kids Carnival area, and lots of free live music.

The program begins at 1:30 pm, with various special performances, community events and music bands keeping the celebration hopping all day into the evening. At 8 pm special guest star Joe Diffie opens the headline show, leading to the city’s wonderful Fireworks Extravaganza at 9:30 pm.

Back in Gatlinburg, the festivities peak at 10 pm with the city’s Fireworks Finale, a fantastic 20-minute, electrifying display of mind-blowing pyrotechnics exploding in the heart of downtown. The best view is between traffic lights #5 and #3, but if you can see the sky you can’t miss it.

There are many visitors in Gatlinburg and Pigeon Forge during this holiday celebration, and traffic is thick. So it’s not practical to see the fireworks in Pigeon Forge and also in Gatlinburg. Happily, visitors have their favorite town to visit, and it works out.

In Gatlinburg, the free Trolley service spans the full length of Parkway and is available to all from 10 am to 10 pm. The trolleys will be jammed, just like the streets and roads – but it’s the friendliest crowd of 100,000 people a visitor could hope to mingle with.

For more details on events and showtimes in the two cities, check the online Gatlinburg and Pigeon Forge event pages.

May gets underway as usual this year with a grand event in Pigeon Forge, as Dolly Parton returns as grand marshal to lead the 32nd Annual Homecoming Parade, on May 5, 2017. The free parade starts at 6 pm at Traffic Light #6, and proceeds – with maximum fanfare, color and spectacle – north along… Read more »