On Sunday, July 3, 2022, a lot of people will stay up late at night to celebrate the coming of July 4th, in the nation’s first Independence Day Parade, as Gatlinburg once again marches to an early drummer, and kicks off its annual parade beginning a few seconds after midnight. 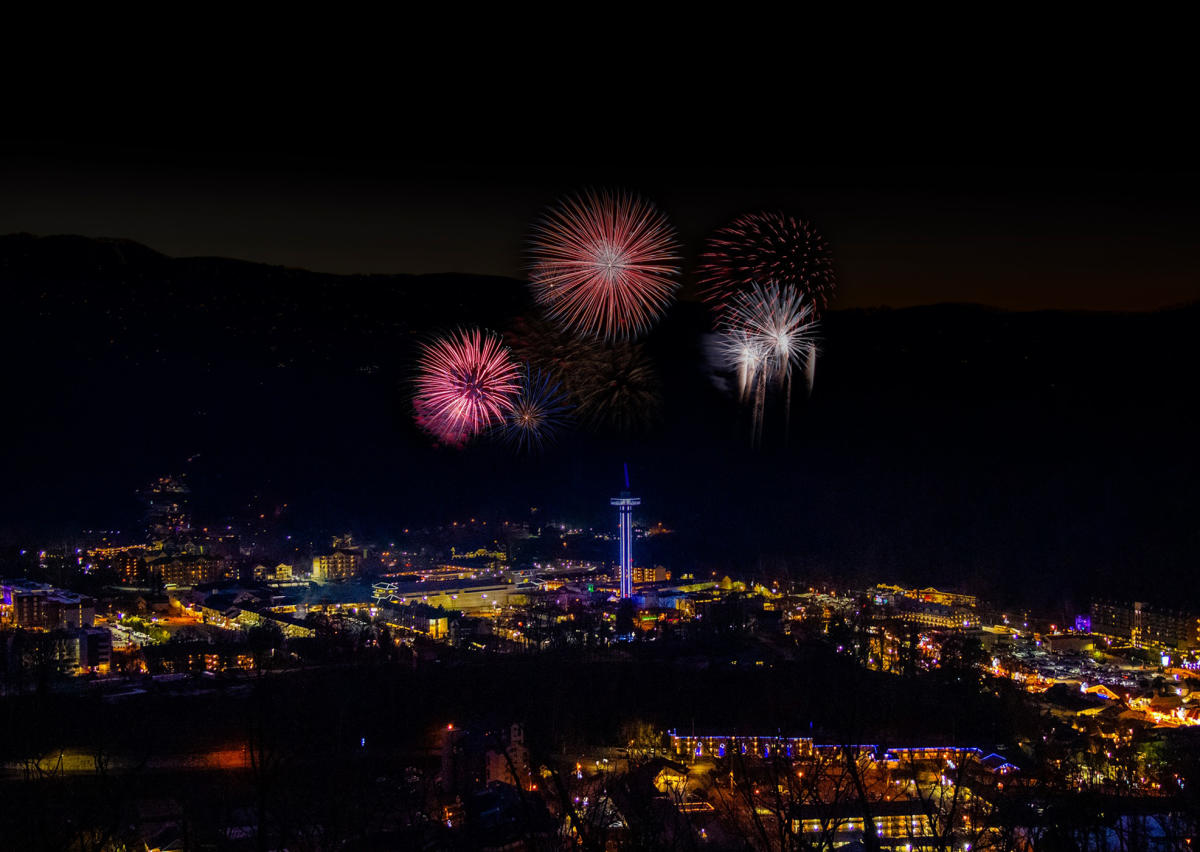 At 12:01 am on the Fourth of July, 2022, the mile-long parade will launch from Baskins Creek Bypass on East Parkway, joining Parkway itself at Light #3 and working its way south down to Light #10. The parade takes up to about an hour and a half to complete and the big question for people watching is, where to watch from?

People start staking out their spot along Parkway from as early as the morning of the 3rd, setting a folding chair in place. You don’t have to be quite so eager, but the nationally renowned and multiply awarded parade attracts a huge crowd that has reached up to around 100,000 people at times, so come as early as you can to get a good place.

Or, you could just stay on your feet and walk along Parkway, mingling with the super friendly crowd we always get, and experience a familiar stroll you may never have done at midnight before!

The parade itself usually fields more than 100 floats and vehicles, with marching bands and military displays, music and clamor in the silence of night, lights and laughter, with horse riders, celebrities, costumed characters, maybe bagpipers, probably huge tethered balloons in cartoon character shapes, dancers, walkers, cheers for the soldiers and first responders, love for the country, happiness all round.

The Grand Marshall this year leading the parade is a rapidly rising singer and songwriter, Tennessee native HunterGirl, fresh from American Idol and CMA Fest, with an original  song in the charts and a voice that makes us realize we only thought we knew what country music sounds like until she sang. Yep, THAT HunterGirl.

It’s going to be a great parade. How will you ever get to sleep after?

Well, try to get some rest and maybe have a hearty breakfast because the challenge of the Fourth has only just begun in Gatlinburg. At 11 am on the day, registration opens for the River Raft Regatta, and at 1 pm the floating contenders will surge down the Little Pigeon River, racing for first place, with three trophies at stake.

If it floats, you can launch it on the river to take part in this un-captained event. Rubber ducks are the favored vessel for this kind of water-borne frenzy, and if somehow you didn’t bring your own, you can rent one as a charity sponsor for $2 and send it forth on the high seas. Maybe you’ll win!

The Regatta starts at Christ in the Smokies Bridge and ends at Ripley’s Aquarium, and you can pace your craft along River Road that follows the course. How will you endure the thrill of this mad race?

Endure you must, because at 11 pm on the night of the 4th, the Gatlinburg Space Needle will be the platform for the city’s spectacular fireworks show. The pyrotechnics are stunning and launching from around 400 feet in the air – you can see the show from most anywhere but squeeze into the area to enjoy the late night revels and mingle with the crowd of celebrants, still standing and not yet tired.

Meanwhile in Pigeon Forge, where better to celebrate Independence Day than in Patriot Park? It’s the annual Patriot Festival for July 4th, 2022 – this year starting at 4pm, with the live music beginning just after 5 and lasting until the Pigeon Forge fireworks steal the show at about 9:50 pm.

The fireworks are spectacular in Pigeon Forge and the music is headlined by country star Josh Turner, with opening acts Liquid Velvet followed by Swamp River Revival. Bring lawn chairs, blankets but no coolers – food vendors are on site. A shuttle runs from the free parking lot on Teaster Lane – see details of this event here.

Everything mentioned here in both towns is FREE to show up and enjoy, and there are various paid offerings to help celebrate from local venues. Noteworthy is SkyLift Park, which actually overlooks the Space Needle, so for a unique vantage point to view the fireworks, this may be fun for you.

But boots on the ground are just fine too, for a wonderful celebration, this Fourth of July. We’ll see you there!