Quality entertainment, big laughs and solid productions aptly describe the dinner theater scene down in Gatlinburg and Pigeon Forge, Tennessee. You and your friends and family simply can’t afford to miss some of the top-notch performances you’ll find here.

But when it comes to family-friendly comedy, one venue in particular stands out: The Comedy Barn in Pigeon Forge. 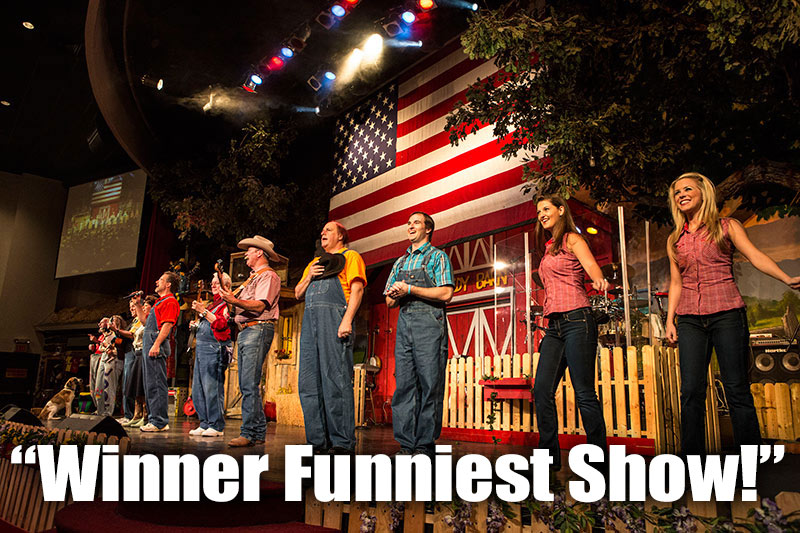 This is a great family show for a good price, featuring a great mix of entertainers. On the stage at the Comedy Barn for the family comedy show, jugglers, fire-eaters, magicians, ventriloquists and comedians strut their stuff and wow and amaze you in between the constant side-splitting laughs you’ll have with your friends and family.

The award-winning family comedy variety show also features live country and gospel music for you to hum and sing along with as you enjoy its guaranteed “night of a thousand laughs”.

What people say about the Comedy Barn

Audiences of the Comedy Barn’s family comedy show highlight Arnold the mind-reading pig (a juggler and his talking dog) as a favorite for kids. The theater also offers a Comedy Critters Show, a Christmas Show – and magic shows for the kids prior to each of the main events.

The venue has scored such highly positive reviews from audiences that it’s won TripAdvisor’s 2014 Award of Excellence. Guests rate the Comedy Barn a solid place to spend a reasonably priced night of fun, with good clean comedy for the family.

The Comedy Critters Show is run by husband-and-wife team Anthony and Alena King and features a motley cast of trained pigs, parrots, cats, dogs and a mini-donkey. The show’s quality has earned it a feature on Animal Planet’s “Pet Star” and Jay Leno’s “The Tonight Show” as well as theme parks, festivals, fairs and other events across the country. This show typically begins in June, at 2pm daily (except for Fridays and Sundays).

The Comedy Barn also rolls out a special comedic show every Christmas that features a combination of new skits plus favorite skits from the past. Featuring trained animals, Christmas-themed comedy routines and a specially decorated venue, the Comedy Barn’s Christmas show is classic snack theater at its best, with a holiday vibe to it.

Snack Theater? The Comedy Barn offers snacks, rather than full meals, during its shows – it knows better than to feed you a plate of spaghetti when you’re laughing so hard.

Tickets and Specials at the Comedy Barn

Be sure to check the website for special deals on ticket prices.

Buy online at the Comedy Barn website or call the Box Office 1-800-29-LAUGH ahead of time to reserve tickets.