If you want Big entertainment with a capital B along with a hearty, finger-licking good Southern meal, and more, then look no further than Dolly Parton’s Stampede in Pigeon Forge, Tennessee – one of the ultimate dinner theater extravaganza experiences you can have.

Action-packed from start to finish, Dolly’s Stampede maintains a star-studded reputation across the nation for its spectacular special effects and amazing stunts. Its offering is very appealing – instead of a regular meal at home or elsewhere, imagine dining inside a packed stadium with hundreds of guests and watching a wild west show featuring horses jumping through rings of fire. It’s a guaranteed evening of fun and food spent with your friends or family, which makes the show a very worthwhile event to attend. 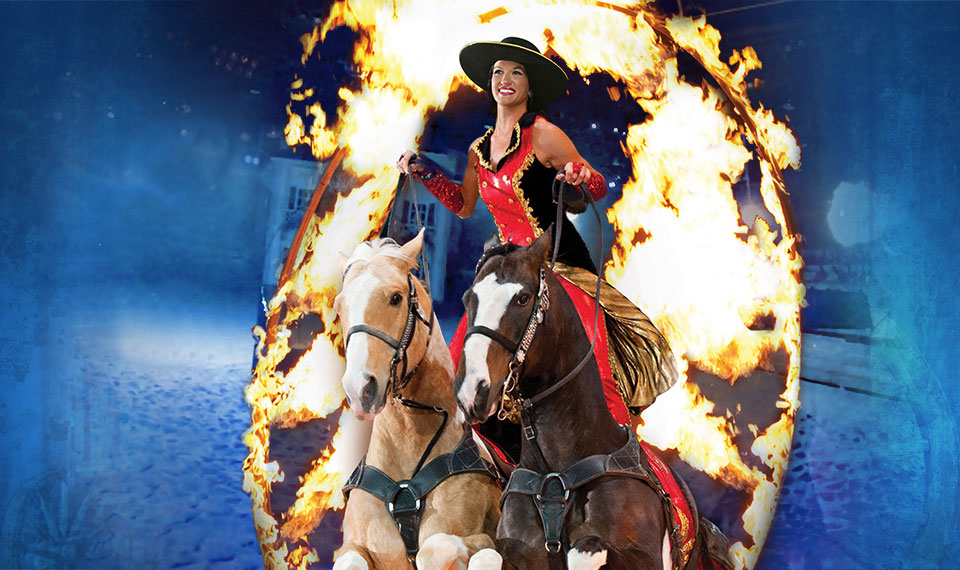 Book your tickets, and make it a point to arrive more than an hour before show time so that you and your family can observe, and maybe pat, the venue’s beautiful horses. All breeds can be found here: from the Quarter horse and Palomino breeds to the pretty Appaloosa and Paint breeds. No cameras are allowed at the show, but arriving before the show like this means you can get a group picture taken of you in the Carriage Room. Also you can catch the acclaimed pre-show, featuring a comedic musical performance of bluegrass and country.

After the pre-show, head to the 35,000 sq ft arena, where the excitement kicks off as soon as the lights dim. You’ll be greeted by a stampede of buffalo, Native Americans and the first pioneering settlers in a staging representing the American Frontier. Then comes the singing, dedicated to the Civil War, with experienced rider-soldiers of the North and South charging into the arena with big flags and outstretched swords.

The war ends as Dolly Parton onscreen sings a patriotic song with doves of peace flying overhead. Rider-soldiers put down their weapons and this signals to you and your family that this terrific, lively show is over, and that the night has ended.

A fantastic family show for all ages, Dolly Parton’s Stampede is a Southern dinner theater show to top them all. You and your family will be talking about it for a long, long time. It’s a show designed to impress – you won’t be disappointed.

If you’re planning to catch the local shows, check out our Pigeon Forge Cabin Rental deals, as well as our Gatlinburg Cabins.