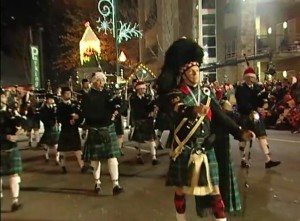 Christmas is coming and Gatlinburg proves it tonight with its 38th Annual Fantasy of Lights Christmas Parade. Over 100 entries including marching bands from neighboring states will take part in the extravaganza, watched by around 80,000 people packed up and down Parkway.

The parade starts at 7:30 pm at traffic light #1A at the north end of town on Hwy 321 and ends at light #10 on the south end about an hour and a half later. Parking is available at the city’s garages at traffic light #3 and also at Ripley’s Aquarium at light #5.

The Gatlinburg Christmas Parade is as spectacular and larger-than-life as every Gatlinburg event, getting bigger and better each year. Last year we saw huge helium-balloon animals and this year promises more of the same. The fabulous lights of Gatlinburg are reason enough to be on the streets any evening in winter-lights season, and with brightly lit and tinseled Christmas floats passing by amid a host of cheering bystanders, what more excuse does anyone need?

Here’s a clip from an earlier parade:

I've worked for Gatlinburg Falls and now Venture Resorts since their inception in 2004. I was born in New London Connecticut, but was raised in Florida. I attended the University of Florida and earned a BS in Electrical Engineering. I then made the obvious transition from that world to Cabin Rentals. I enjoy everything about my job from people management to interacting with guest.

It’s Christmas in the Smokies Bluegrass Festival again in Pigeon Forge as Lorraine Jordan and Carolina Road gather with a couple of dozen hot bluegrass bands and performers for this year’s amazing music festival, Wednesday though Saturday, December 6-9, 2017. This is a really good 4-day festival, held at Smoky Mountain Convention Center on Parkway,… Read more »

As the Christmas period draws closer it’s always good to remember what the time was originally about, and the Smoky Mountain Area Rescue Ministries organization achieves this every year with its Festival of Trees in Gatlinburg, a first taste of Christmas in the Smoky Mountains. Share…FacebookTwitteremailReddit