HOME PAGE > Things to Do > Kids & Family > Tuckaleechee Caverns: the Tallest Underground Waterfall in the U.S.

Exploring Tuckaleechee Caverns in Townsend, Tennessee, is a thrilling adventure for kids — and for adults too. People who have gone on the mile-long guided tour of these 30-million-year-old underground caverns beneath the Great Smoky Mountains say they felt like they visited another planet. You’ll see dramatic formations, a room as large as a football field, and the biggest underground waterfall in the U.S. 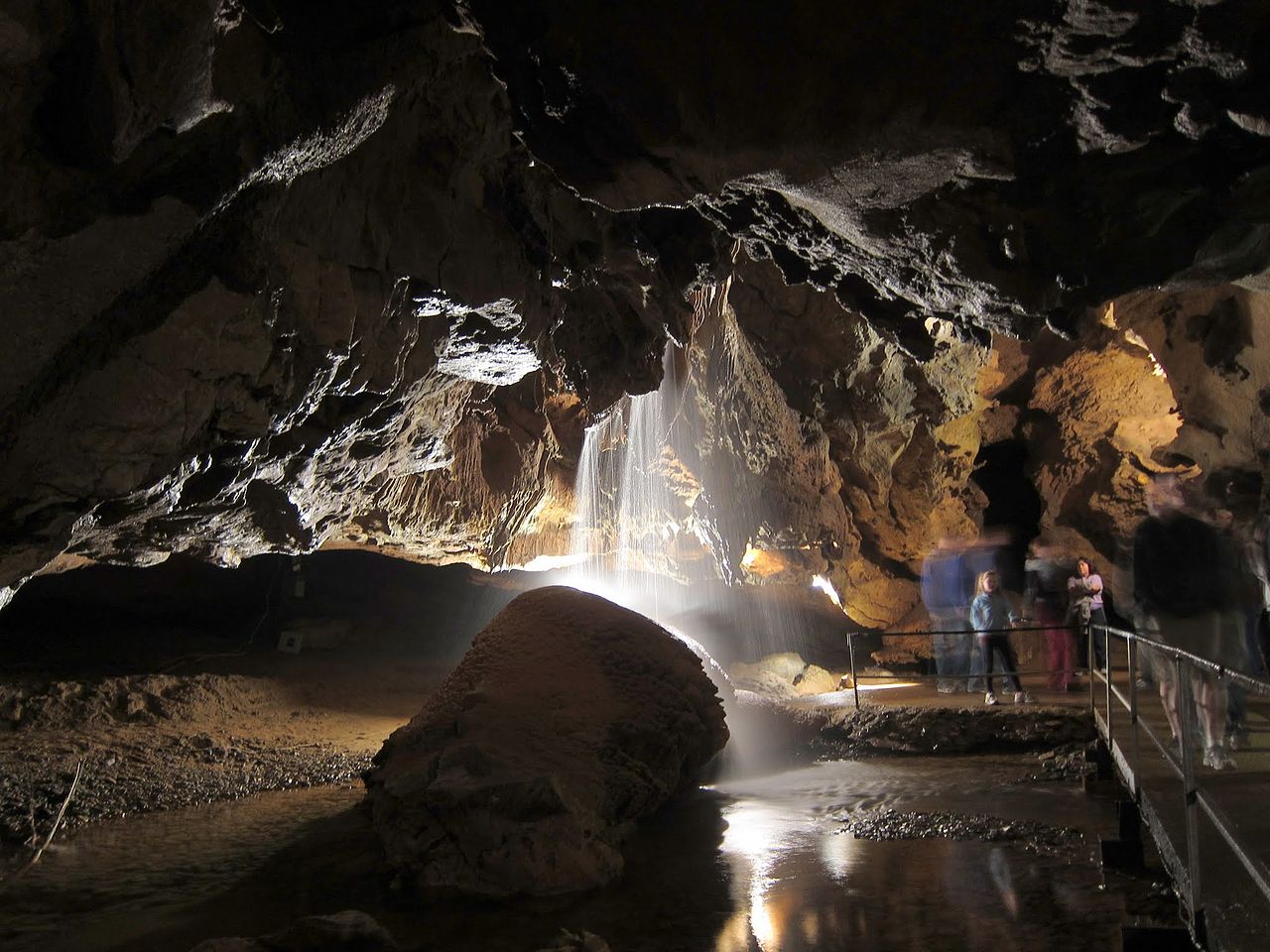 Tuckaleechee Caverns is a family-run attraction that earned AAA’s highest rating of five stars. Though the caverns started forming about 30 millions years ago, they are still active, with new formations growing all the time.

Guided tours take you on a mile-long walk on lighted pathways through the caverns. The guides are enthusiastic and knowledgeable. The whole family will learn a lot and enjoy themselves at the same time. There are many photo opportunities along the tour, so get ready to take some great shots.

Water plays an important role in the caverns. The site used to contain inland seas. Today, an underground river runs the length of the caverns. The beautiful formations extending down from the ceiling and up from the floor are created by dripping water leaving mineral deposits behind, a slow process that can take millions of years.

One of the highlights of the tour is the spectacular Big Room, which is longer and wider than a football field. The ceiling is almost 150 feet high and contains other-worldly formations that extend all the way down to the floor. It is the largest room in a cavern or cave that is open to the public in the Eastern U.S.

At the end of the tour, you will come to a beautiful underground waterfall, the tallest one in the U.S. The waterfall drops 210 feet in two tiers. The water there is so clean that people bring bottles to take some home with them.

The caverns also play a role in national security. The bedrock there can pick up vibrations all the way on the other side of the planet. The Department of Defense has seismic sensors installed in the caverns that can detect nuclear tests around the world, as well as earthquakes and hurricanes.

After your tour, don’t miss the popular home-made fudge in the gift shop.

To visit the caverns, you should be able to walk more than a mile and climb 400 steps. Cavern temperature is about 58 F. Bring good walking shoes and a light jacket. Tours take about an hour to an hour and a half. You don’t need reservations. Just show up, and you’ll get into the next available tour.

Tuckaleechee Caverns is open from March 15 to November 15 and closed for the winter. Hours are 10-5 in March and November and 10-6 in April through October. The address is 825 Cavern Road in Townsend, Tennessee. From Gatlinburg, take Highway 321 to Old Tuckaleechee Road, then to Old Cades Cove Road, Dry Valley Road, and Cavern Road. For more information, call (865) 448-2274 and see the Tuckaleechee Caverns website.

This part of the area calls itself the Quiet Side of the Smoky Mountains, and it has a point. Many people like to stay in the Wears Valley end of things to escape the bustle of Gatlinburg and Pigeon Forge. A scenic way to get here from Gatlinburg is along Little River Road, with many beautiful spots along the way.

We have rental cabins all over the area, including Wears Valley cabins, as well as our Gatlinburg cabins and our Pigeon Forge cabin rental.