November 6, 7 and 9 mark the 2018 winter fun seasons beginning in Pigeon Forge, Gatlinburg and Sevierville, TN. These days are the kickoff celebrations as each town turns on its millions of Christmas lights to start the season of Winterfest. 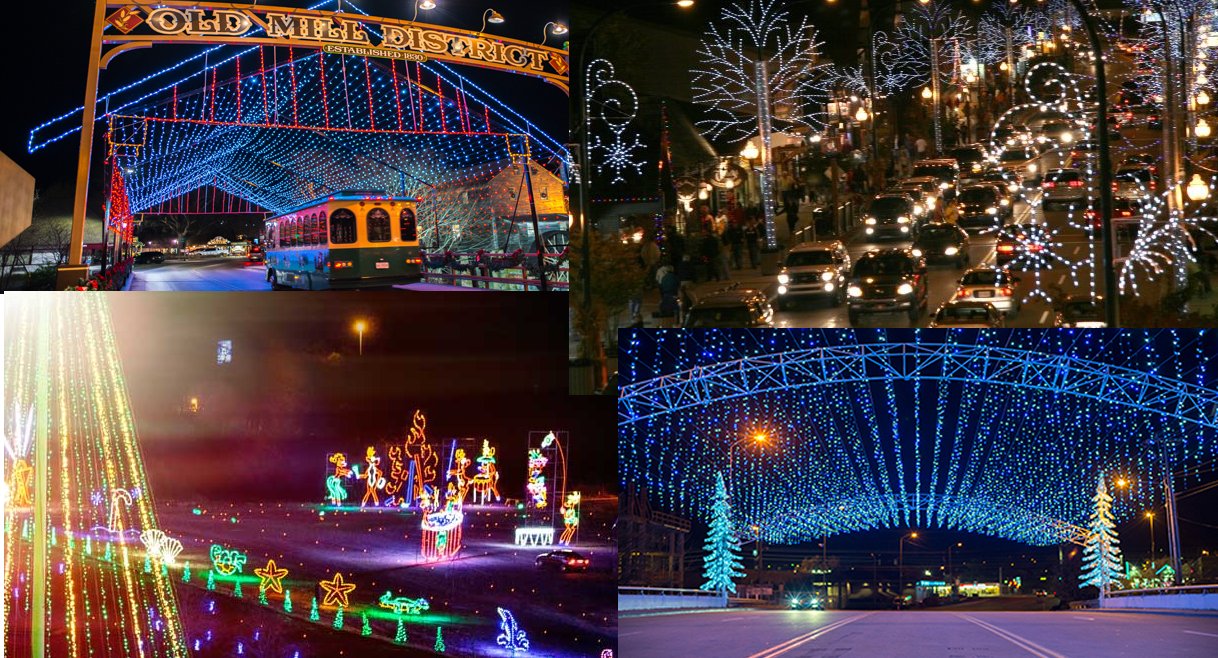 Pigeon Forge leads the pack this year on Tuesday, November 6 with its Winterfest Kickoff starting at 4 pm in Patriot Park on Old Mill Avenue. The festivities include live music, food and games, as well as kids activities in this family friendly, 29th Annual event.

The lights will be turned on at this time, and will stay on through the Winterfest season ending on February 18, 2019. During this time there will be countless seasonal and winter activities in this bustling town, including the Driving Tour of Lights, a guide to the best light displays in the city.

The town of Gatlinburg follows with its own celebration on the next day, Wednesday, November 7, 2018, with its Chili Cookoff and Winter Magic Kickoff. Held in downtown Gatlinburg on Parkway, the popular chili cookoff features food samples from more than 2 dozen establishments, and for a $10 ticket you can have your fill of some of the best chili you’ll ever taste – the event itself is free.

It’s still the season of fall colors in the Smoky Mountains, a later arrival this year, but with Daylight Savings Time now ended the evenings get plenty dark enough for Gatlinburg’s millions of super-sharp, LED lights to burst into color with all kinds of fun displays. Gatlinburg’s Winter Magic will last until the end of January, 2019, and the many festivities include the Trolley Tour of Lights, letting a local guide drive you around the best spots in town for the lights.

The event starts at 5 pm and will last until 8 pm. Besides the food and the cheerful crowd, there will be live music, starting with bluegrass from Jimbo Whaley & Greenbrier, followed by headliner band the Petty Hearts.

The cookoff contest itself is between 5:30 and 6:30 pm, seeking to find the best recipes in the Chili fun, with several awards. Come hungry!

The fun town of Sevierville, just up the road from Pigeon Forge, has a few million of its own lights to dazzle the eye with, and turns them on Friday, November 9, 2018. This year as an exception the city doesn’t plan to hold a kickoff festival, figuring that there are plenty of festivities among the the three towns, which share a common footprint for most visitors.

Sevierville’s Winterfest lasts through February 28, 20019, and features the whole town lit up with seasonal displays. As always, Sevierville goes the extra mile – 25 of them in fact – and decks the highway with some of its 15 million lights, welcoming visitors coming in from Interstate 40 to the Smoky Mountains.

In case you want more lights, Dollywood opens its Christmas season with its own several million lights on Saturday, November 10, 2018. This signals the start of the Parade of Many Colors – which means fireworks as well as lights – each night through January 5, 2019. This year debuts Dollywood’s latest innovation, Glacier Ridge, a new area lit up like the Aurora Borealis.

More lights? Why not! On the same day, November 10, 2018, Shadrack’s Christmas Wonderland opens for its winter season, a drive-through experience where you and the family can stay comfortably in your car and drive around through the state-of-the-art light displays. Shadrack’s will be open every night including Christmas, through January 6, 2019.

So wherever you go for fun this season, nowhere is very far from our Gatlinburg cabin rentals, Pigeon Forge cabins, and Wears Valley cabins.

Winterfest Lights Turn On for 2017

The holiday spirit is alive and well in the Great Smoky Mountains! Here is your guide to some of the best events taking place this year in the region, including a variety of outdoor events so that you and your family can stay safe and still enjoy the magic of the season.